What the ten commandments don’t say.

One for each finger;
a handy teaching aid for children
as we seek for them to remember the law.
A set of rules for right living? Hardly.
More like a list of instructions
designed to avoid the worst consequences
of human greed and fear. A reminder
that our fellow humans also have the right
to be accorded dignity and respect.
‘Thou shalt not –‘ . . .
Compile your own catalogue of boundaries,
the transgressing of which will rapidly
bring an end to expectations
of neighbourly cooperation and peaceful living.
These ten represent the merest minimum
of what is required.
As the Teacher said,
what we really need is generosity,
grace and love. These three elevate us
and determinedly carry us
way beyond mere proscriptions
to the full and rich possibilities of life
as it was always intended to be.
Ken Rookes
Posted by Rev Gordon Bannon at September 28, 2011 No comments:

Solidarity, compassion, caring, communion and loving. Such values and inner powers can lay the foundation of a new paradigm of civilization, the civilization of the humanity reunited in the Common House, on the Planet Earth.... Our mission is to celebrate the greatness of Creation and connect it again to the Core where it came from and to where it will go, with care, lightness, joy, reverence and love. -Leonardo Boff
http://www.edgeofenclosure.org/proper22a.html
Posted by Rev Gordon Bannon at September 28, 2011 No comments:

two ways of being church

It is very easy to be servants of the word without disturbing the world: a very spiritualized word, a word without any commitment to history, a word that can sound in any part of the world because it belongs to no part of the world. A word like that creates no problems, starts no conflicts. What starts conflicts and persecutions, what marks the genuine Church, is the word that, burning like the word of the prophets, proclaims and accuses: proclaims to the people God's wonders to be believed and venerated, and accuses of sin those who oppose God's reign, so that they may tear that sin out of their hearts, out of their societies, out of their laws - out of the structures that oppress, that imprison, that violate the rights of God and of humanity. -Oscar Romero 1917-1880 The Violence of Love http://www.edgeofenclosure.org/proper21a.html
Posted by Rev Gordon Bannon at September 26, 2011 No comments:

Posted by Rev Gordon Bannon at September 26, 2011 No comments:

Is the Lord among us or not?

This is the question, dark and deep

that each person asks, (if we are honest)

from time to time.

Out here in the wilderness

we thirst and we wonder

if we should ever have left Egypt.

but this Moses and his strange

of them we are not so sure.

Out here in the wilderness,

away from secure streams

what will we drink tomorrow,

how shall we sustain ourselves,

our children and our animals?

Out here in the wilderness

we scan the skies and ask

whether the God who fashions clouds,

gathers snow in the heavenly storehouses

and brings to stillness the raging winds,

is still among us,

A shame about my brother

being such a lazy kind;

with a caring heart and mind.

Be along in just a moment,

there's a few things I must do;

feel free to start without me --

You know I'm there for you.

making sure that it's all right.

I'm so eager to get on with it,

Been training for this moment,

I've sat through many classes;

and all those credit passes.

but I'd better take a pause

to mentally prepare myself

for shouldering the cause.

with apron, gloves and knife,

to go down to the vineyard

and to do the work of life. But

perhaps the time is not yet right,

we mustn't rush these things;

need time to think and to be sure, 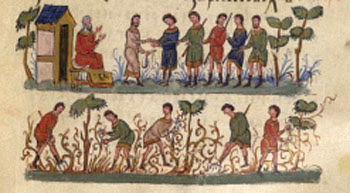 Posted by Rev Gordon Bannon at September 14, 2011 No comments:

Email ThisBlogThis!Share to TwitterShare to FacebookShare to Pinterest
Labels: Jesus, parable., workers in the vineyard

Millais: labourers in the vineyard

Posted by Rev Gordon Bannon at September 14, 2011 No comments:

Because no one had hired us

Because no one had hired us

we stood around all day

waiting, yarning. We watched as

striking deals and gathering their labour.

We could have thrust ourselves forward,

but we didn’t. The day was hot;

it would be cooler tomorrow.

At five, the shadows were starting to grow

long and it was pleasantly cool

when the landowner arrived.

(We had watched him come

and go throughout the day,

recruiting teams for his vineyard.)

Seems he still had grapes that needed picking.

We shrugged our collective shoulders.

for a cup of wine on the way home.

picked a few baskets before the sun

and lined up with the rest of them.

You wouldn’t believe it,

but he paid us late-comers first,

and gave us the full twelve hours!

He paid everyone the full twelve hours.

You’d need a knife to get the smiles

of our faces, but the six o’clock crowd

didn’t get the joke at all. 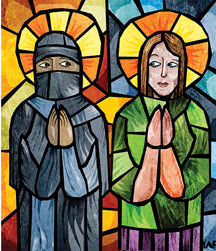 This Sunday marks the 10th anniversary of the 9/11 terrorist attacks. We will all take time to remember the day and the lives that were lost, but 10 years later, we must go deeper.

There were two paths forward from the ashes and rubble of 9/11: One path led to war, torture, and fear, but another path -- led by people of faith across the world -- was marked by soul-searching, genuine mourning for the lost, and standing up for peace-building and caring for our neighbors.

Although our government and many Australians, regrettably, have chosen the first path, the Uniting Church invites you to celebrate the alternative journey -- to stand shoulder to shoulder with our brothers and sisters of all faiths, and no faith, who are helping to build a nation that reflects our best values.

On the 10th anniversary of 9/11, affirm your commitment to peace-building and reconciliation by signing this commemoration pledge:
“As a Christian and an Australian, on the 10th anniversary of the 9/11 attacks
I commit myself to work for building peace in my community and the world,
and to love my neighbors by standing against hate and fear.”
Posted by Rev Gordon Bannon at September 08, 2011 No comments:

The tower of love

"Perhaps the images of are present to us during the proclamations of today’s readings: the , fires, collapsing, falling bodies and the sounds of terror. How do we pray today as we stand at the foot of the single Tower of peace and mercy?

Forgiving is not the same as forgetting. We can never forget those pictures and sounds of four years ago today. If our powerful nations vengefully go after and destroy those forces who attacked the West because of our greed, religious intolerance or insensitivity and then our nations continue injurious actions, then in time we will be nine-elevened again.

We stand before the Single Tower of World-Love and ask God’s mercy on us who have been the violators of other countries, peoples and religions.

Justice is a compassionate virtue which discards violence as an easy option. With the holy water of our tears of grieving, we remember the horror and vengeful feelings we all had and maybe still have.

The challenge of Jesus is to be a forgiven person on a political level as well as the personal and to live in such a way that we can reverse the spiral of vengeance downwards and resurrect a true world-center trading in mercy, respect, and justice for all."
apologies that i do not know the author
Posted by Rev Gordon Bannon at September 08, 2011 No comments:

of the high moral ground.

are validated by their purpose.

of those whose shrill voices

to their respect for truth.

waged in any country

that has fields of oil.

that includes the word

Was it Mary of Bethany,

weeping for her dead brother?

weeping in the garden for her dead master?

Or Mary the mother,

weeping for her crucified son

as he is lowered from his cross?

There are a lot of weeping Marys;

which one was the old song-writer

Cheer up, Mary, he is saying;

if God can consign the army of Pharaoh

to such a watery destruction,

he can surely remedy

your own cause for grief.

There must have been much weeping

also in Egypt, according to the story

told by the Hebrew people.

Every family from Pharaoh down,

weeping for their slain firstborn.

And now, the mothers, wives and children

of the noble and loyal soldiers

swept away by the sea;

Can you hear them?

Certainly Miriam is not weeping

as she leads the Hebrew people

in song and dance triumph and joy.

Forgiveness is the answer to the child's dream of a miracle by which what is broken is made whole again, what is soiled is made clean again. --Dag Hammarskjold
Posted by Rev Gordon Bannon at September 06, 2011 No comments:

he decided that he had better

This he did, diligently,

although at times it was a struggle,

(his brother not being known

for his efforts at self-improvement).

Then, at the seventy-eighth

offence, when he was entitled

to hold the grudge,

he discovered that forgiveness had taken hold.

he had already forgiven

After that he stopped counting.

Email ThisBlogThis!Share to TwitterShare to FacebookShare to Pinterest
Labels: forgiveness 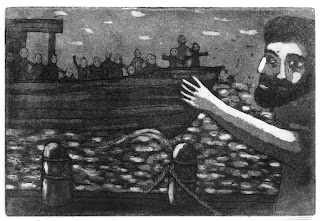 The prophet makes the strangers welcome

Posted in response to events of recent days.
Thank you, High Court of Australia, for lessening our shame.