A reflection on this Sunday's gospel

"Often people read about these encounters and extract a lesson for Christians, for us, his would-be followers. It goes something like this: “If you want to follow Jesus you must do so wholeheartedly. There is no middle ground. You cannot proclaim the good news unless you’ve left everything to live it.” If that’s the case, I don’t know how it ever gets proclaimed. If it depends on us becoming “good,” or practicing flawless nonattachment, then it doesn’t seem like it’s very good news. The followers of Christ are dense, forgetful and bumbling.

Maybe these encounters reveal more about the nature of the gospel than about the conditions necessary for discipleship. Foxes have holes, and birds of the air have nests, but the Son of Man? No booth can contain him. Whatever he’s up to, it’s different than making a nest or digging a hole. “Leave the dead to bury the dead, but as for you, go and proclaim the kingdom of God.” Maybe the point isn’t so much “you’re not good enough, go away you pathetic failure,” but rather that what we have to do with here, the gospel, the kingdom of God, is so radically alive that anything that has to do with death distracts from it—anything that has to do with hopelessness: lifeless systems, merciless constructs, rigid, graceless standards of purity. The point isn’t that a disciple must be good enough (meet some merciless standard) in order to get approval. The point is the scandalously redemptive, unmanageably living grace of God."
From http://theolog.org/2007/06/blogging-toward-sunday_25.html
Posted by Rev Gordon Bannon at June 21, 2010 No comments:

A Venetian was selling some blinds;
“They are marvellous things!” said he.
“Just put them inside of your mind;
you’ll be surprised at what you can’t see.

“We supplied a fine set to the PM,
the Premier and Treasurer too.
Here are testimonials from them,
telling what they have screened from their view.

“My eyes used to give me such trouble
with the news and the current affairs,
My blinds did their trick at the double
while I reclined in my favourite chair.

“My beautiful blinds are impressive;
I can see no-one homeless or strange,
none weeping, nor persons depressive;
and they come in a full colour range.

“There are no better blinds in the country;
we are giving them out at half price!
They come with a ten-year guarantee
that they’ll keep your life pleasantly nice.”

"It is no small pity, and should cause us no little shame, that, through our own fault, we do not understand ourselves, or know who we are. Would it not be a sign of great ignorance, my daughters, if a person were asked who he was, and could not say, and had no idea who his father or mother was, or from what country he came? Though that is a great stupidity, our own is incomparably greater if we make no attempt to discover what we are, and only know that we are living in these bodies and have a vague idea, because we have heard it, and because our faith tells us so, that we possess souls. As to what good qualities there may be in our souls, or who dwells within them, or how precious they are — those are things which seldom consider and so we trouble little about carefully preserving the soul's beauty. All our interest is centred in the rough setting of the diamond and in the outer wall of the castle – that is to say in these bodies of ours."
Teresa of Avila
Posted by Rev Gordon Bannon at June 17, 2010 No comments:

An advert for you

On the left of the page you will find a link to cheap microsoft software. many members do not know that you can get very cheap licensed copies of Windows 7, and microsoft office (word, outlook etc) through the Uniting Church. So click on the link and have a look.
Posted by Rev Gordon Bannon at June 16, 2010 No comments:

A STATEMENT OF FAITH
"We are a Pilgrim People" is a statement of faith (Uniting in Worship: People's Book, p.130) adapted from the Basis of Union of the Uniting Church in Australia.
I versified it quite some years ago and offer it again for use in worship.

God comes to us as Father, Son and Spirit,
this we believe; one God to be adored.
Christ Jesus who was crucified, and risen,
we so proclaim; confessing him as Lord.

We honour Jesus Christ, the new creation;
Lord of the church; and over all things Head.
And he will bring the final consummation
of everything; the living and the dead.

We journey ever as a pilgrim people
set on the way towards a promised goal.
With word and sacraments Christ Jesus feeds us;
the Spirit journeys with us to console.

Within one great and holy congregation,
in unity and faith we worship still.
One catholic and apostolic witness;
this is the gift of Christ, and is his will.

Christ crucified we live each day confessing
and, using gifts the Spirit may afford,
we join to serve this broken world together;
and wait with hope the new day of the Lord.
Jeff Shrowder © 1989
Posted by Jeff Shrowder at June 14, 2010 1 comment:

The pigs were drowned

the pigs were drowned
In the shadowy depths
of the lake at Gerasa
the demons lie imprisoned
in the decomposing carcasses
of a herd of swine.

Gone is their host of many years,
the man known as Legion,
having returned home, clothed
unchained, and in his right mind.
There he declares
the wonders of God,
and attempts to resume his life;
the sideways glances remain.

Sometimes a new herd of pigs
forages among the tombs
and the rusty shackles, discarded
on the eastern shore at Gerasa.
The swineherds, for fear,
try to drive them away.
They do not trust the bubbling gasses,
which, at intervals,
the lake releases
from its gloomy bed.

Gone, too, is the prophet
who gave the man his freedom
and caused the commotion.
He was not made welcome.
Posted by Ken Rookes at June 14, 2010 No comments:

She could be found in the streets
that polite people avoided,
where she exchanged sly winks with respectable men
for whom she was an occasional convenience.
Venturing into the marketplace that day
she sensed the disparaging glances of the women
before they hastily looked away.
There that she made her purchase of the jar
with its sweetly perfumed ointment.
The store-holder grinned as he smugly suggested
that a special man was in for a good time tonight.

He was a special man, a fellow outsider.
Listening from the edges of a crowd
the woman heard him speak of divine love,
abundant, generous and unstinting.
She heard his words of unexpected forgiveness,
and felt the friendship in his voice;
freely offered and without the usual demands.
Since childhood’s end her dealings with men
had been largely transactions of desperation;
the marketing of services, and of a commodity
that some loosely called, ‘love.’

She determined to trust in his words
and in the truth in his eyes;
and dared to hope.
But grace is strange and hard to grasp
when encountered for the first time.
Not quite able to break free
from the baggage of many years,
she came seeking the man
who had made her heart sing with gratitude
and joy. Thus she offered her own gifts:
her tears, her kisses, and the alabaster jar.
Posted by Ken Rookes at June 10, 2010 No comments:

We have a God, a Savior, who touches us - solemnly, profoundly, and with purpose.

And, isn't that just as troubling?

Isn't it so much more desirable to have a God who is at arm's length? Maybe not a universe away separated from us by incomprehension, but certainly not a God intimately reaches out his hand and places it upon us.

We don't do that.

Unless we understand ourselves as hanging on the precipice of birth and death. Unless we realize that we walk a tightrope, and in the balance is life itself.

Because this story isn't just about some guy who is brought back to life. I mean, that's great and all, but this story is about us.

As Luke crafts this story he saturates it in death. There's a woman who's a widow. She now a grieving mother. The corpse of her son is there. It's a funeral procession.

This story has been dipped and coated in death. It wreaks of decay, despair, and grief.

And the one who is dead, is us. And Jesus, reaches out his hand and touches us. And he tells us to get up....

We get so comfortable in life that we think that everything is just normal - that all is ok.

We can even get comfortable in church-life, shuffling along making our way to our pew. Sitting attentively. Behaving. Going up for Communion when it's time, and dropping our money in the plate when the nice man comes by.

We're either dead, or we're being birthed by God. And, when you put it like that, touching is just fine. Bring it on.

Bring those calloused hands on, and stop the parade.

This is big. And we have no idea.
from - http://rmcmorley.typepad.com/a-garden-path/2010/05/proper-5c-thoughts-and-exegesis.html
Posted by Rev Gordon Bannon at June 02, 2010 No comments:

A message from a dead Pope 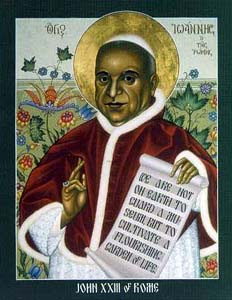 I understand that tomorrow is the anniversary of the death of Pope John-Paul the 23rd (the one who initiated that 2nd Vatican council). I ran across a quote by him which i thought could be a motto for us in the modern church.
"We are not on Earth to guard a museum, but to cultivate a flourishing garden of life."
Posted by Rev Gordon Bannon at June 02, 2010 No comments: