every day may we wonder at ourselves and the richness of life.

Julia Esquivel, Guatemalan poet,  prays this way:
Jesus said,
“You ought always to pray and not to faint.”
So we do not pray for easy lives;
we pray to be stronger women and men.
And we do not pray for tasks equal to our powers,
but for power equal to our tasks.
Then, the doing of our work will be no miracle
– we will be the miracle.
Every day may we wonder at ourselves
and the richness of life
which has come to us by the grace of God. Amen.
http://biteintheapple.com/midsummer-wisdom/
Posted by Rev Gordon Bannon at June 24, 2013 No comments:

"James and John, the Sons of Zebedee, to Jesus, about the Samaritans:

Lord, do you want us to command fire to come down from heaven and consume them?

I mean…really?
“Jesus, do you want us to burn people alive on your behalf?”
Is that even close to Jesus’ M.O.? Jesus, the Prince of Peace…the forgiveness and love-your-neighbor guy?
This is like one of those moments when your crazy uncle says something so ridiculously inappropriate that everyone just turns and stares with their mouth agape for a moment."
http://www.rickmorley.com/archives/2642?utm_source=rss&utm_medium=rss&utm_campaign=face-palm
Posted by Rev Gordon Bannon at June 24, 2013 No comments:

If Jesus came to your town,
would anybody care;
would the people gather in the park
and listen to him there?

If Jesus came to your street
would you come outside and see?
Would you talk with his disciples
and invite them ‘round for tea.

If Jesus came to your house
would you get out the good plates;
would you let him know he’s special
and that you want to be his mate.

Would you recognise his homelessness
and offer him a bed,
(along with all his homeless mates),
and hear the things he said?

If Jesus came to dinner
would you grab a mop and broom,
for to make a good impression;
and to tidy up the room?

Would you smile and make him welcome
knowing he’ll be gone next day;
or would you take his message deep inside
and invite him there to stay?


And Jesus said to him, “Foxes have holes, and birds of the air have nests; but the Son of Man has nowhere to lay his head.”

According to the gospels of Matthew and Mark,
Jesus did have a home, in .
I wonder who looked after it while he walked
his itinerant road for those three years;
did he put it on the market
or was he only renting? Perhaps,
for a time, the Son of Man did have a place
to lay his head.
Most nights I am at home
and I lay mine upon my familiar pillow
with gratitude. The eleventh residence
since we began our married life
is also our own. My itinerancy
requires a large removalist’s truck,
being no match for that of my Lord;
and my discipleship seems to be bordered
by my need for modest comfort
and a future with at least a degree of certainty.
In the face of all this, I stubbornly assert
my claim to be a disciple,
a sometime servant of truth,
a stumbling sharer of gospel hope,
a learner striving towards the Kingdom;
following one who had no place to lay his head,
and hoping to prove fruitful.

Sorry, i'm having far too much fun with this 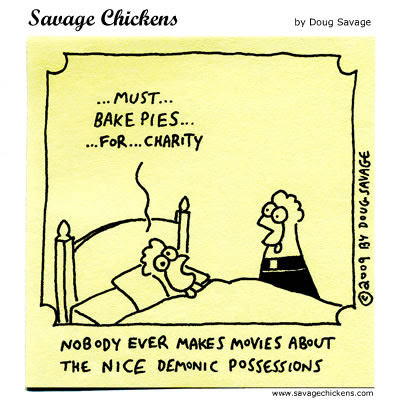 For those who have dwelt in depression's dark wood, and known its inexplicable agony, their return from the abyss is not unlike the ascent of the poet, trudging upward and upward out of hell's black depths and at last emerging into what he saw as "the shining world." There, whoever has been restored to health has almost always been restored to the capacity for serenity and joy, and this may be indemnity enough for having endured the despair beyond despair.E quindi uscimmo a riveder le stelle.And so we came forth, and once again beheld the stars.-William Styron 1925-2006Darkness Visible (and Dante quote)
http://www.edgeofenclosure.org/proper7c.html
Posted by Rev Gordon Bannon at June 18, 2013 No comments:

At Gerasa, by the lake,
the grassy weeds struggle for a foothold
in the stony earth among the tombs.
On occasion, and in season,
a determined flower will triumph,
flashing red or yellow in defiance.

At Gerasa, by the lake,
among those tombs,
one took root like a weed.
Naked, wild and captive to madness,
he regularly cast off the shackles and constraints
imposed by nearby townsfolk,
among whom he had once been numbered
as neighbour and kin.
A challenge to good order, comfort and faith,
they had been relieved
when he chose to make his home
half-way between the living and the dead.


At Gerasa, by the lake
one came; human,
but touched with his own strange brand
of divine insanity.
(It is often said that it takes one to know one.)
Beyond the crazed ranting wildness
he saw the red flashing flower of defiant life;
loved him,
and spoke the needed words.

The pigs were drowned

the pigs were drowned


In the shadowy depths
of the lake at Gerasa
the demons lie imprisoned
in the decomposing carcasses
of a herd of swine.
Gone is their host of many years,
the man known as Legion,
having returned home, clothed
unchained, and in his right mind.
There he declares
the wonders of God,
and attempts to resume his life;
the sideways glances remain.

Sometimes a new herd of pigs
forages among the tombs
and the rusty shackles, discarded
on the eastern shore at Gerasa.
The swineherds, for fear,
try to drive them away.
They do not trust the bubbling gasses,
which, at intervals,
the lake releases
from its gloomy bed.

Gone, too, is the prophet
who gave the man his freedom
and caused the commotion.
He was not made welcome. 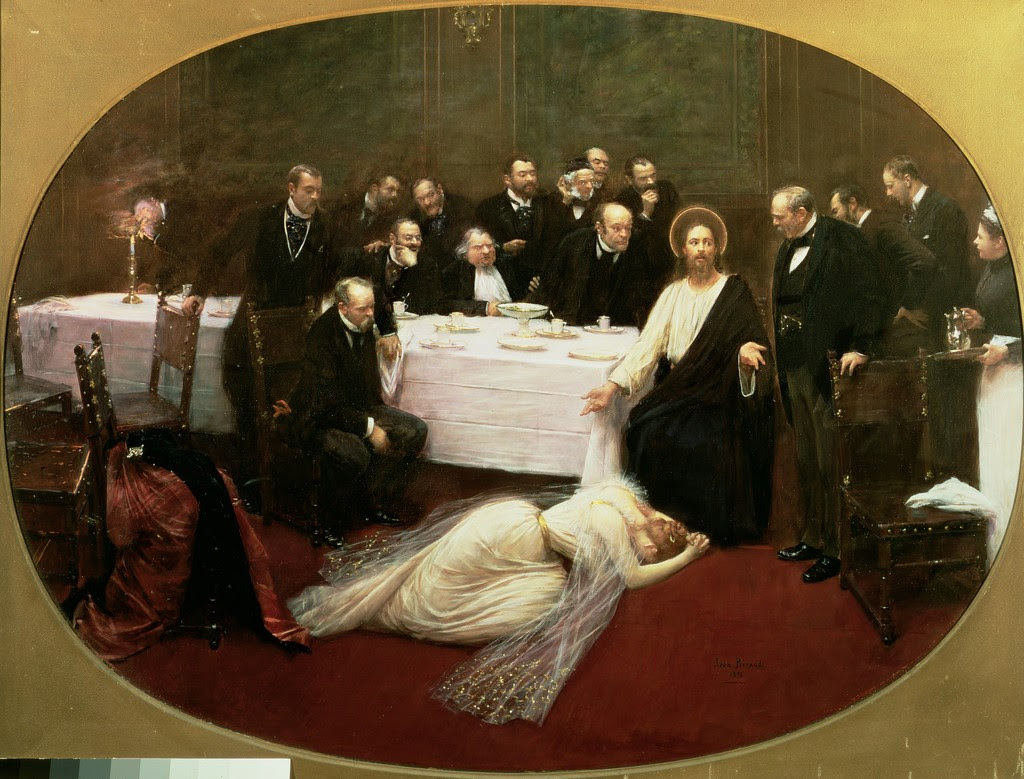 forgiveness to the max

There is an old legend about Judas that Madeleine L'Engle tells. The legend is that after his death Judas found himself at the bottom of a deep and slimy pit. For thousands of years he wept his repentance, and when the tears were finally spent, he looked up and saw way, way up a tiny glimmer of light. After he had contemplated it for another thousand years or so, he began to try to climb up towards the light. The walls of the pit were dark and slimy, and he kept slipping back down. Finally, after great effort, he neared the top and then he slipped and fell all the way back down to the bottom. It took him many years to recover, all the time weeping bitter tears of grief and repentance, and then he started to climb up again. After many more falls and efforts and failures, he reached the top and dragged himself into an upper room with twelve people seated around the table. "We've been waiting for you, Judas," Jesus said. "We couldn't begin till you came."
https://www.stphilipscathedral.org/sermons/newsView.asp?NewsId=40968880&CategoryID=3
Posted by Rev Gordon Bannon at June 11, 2013 No comments:


Turning away from the righteous Pharisee
he looked with love
upon the subject of his host’s derision.
The unnamed woman knew her place,
and had knowingly disregarded all the conventions,
upsetting more than a jar of ointment.
The consensus was clear: this woman
did not fit in with polite company.
She belonged out there,
in the shadowed places,
where ambiguities abound
and sinners lead their anxious lives.
Not in here, where the well-mannered Simon
extends his tepid hospitality
to this latest sensation,
the wandering teacher from the provinces;
he, at least, had an invitation.
With his feet still wet from ointment and tears,
the man speaks softly of warm forgiveness,
of welcome, gratitude, love and peace.
He does not care for the cold and calculating rules
by which respectable society is ordered;
and outrageously says so.

One who loves much

the widow of Nain

"The Christian story is good news not because the widow of Nain got her son back.  No, the Christian story is of a down to earth God who becomes truly human with us in Jesus Christ.  He suffers with us and for us.  He dies with us and for us, so that, by His dying, the ultimate power of sin, death, and evil is undone.  Indeed Good Friday and Easter are Good News, because they answer the deepest hurts and the greatest fears of human experience."
http://www.predigten.uni-goettingen.de/predigt.php?id=278&kennung=20071224de
Posted by Rev Gordon Bannon at June 05, 2013 No comments:

The dead do not commonly return to life.

The laws of nature,
gravity, motion, molecular forces,
the rotation of the planet,
the limitations of light’s velocity,
DNA’s blueprint,
time’s one-way direction,
and the cycles of life, death and new life,
seem to be upheld punctiliously
by the creator of the universe.
The dead do not commonly return to life.
The resurrection of our Lord
is held to be the exception;
and who knows what actually happened
on those few occasions
when he is said to have raised the dead.
Even his own risen appearances
are matters for speculation;
feel my wounds / touch me not /
now we see him / now we don’t.
We need to sit with the mystery
and embrace the uncertainty;
assured only that he who died
is strangely with us,
and that his Spirit is here
loving us into life and risk.

The surprising quality of generosity

There is a principle at the centre of creation,
written for all time in the dust
from which the universe was fabricated
and glowing with a lustre born
of hope’s never flagging defiance.
Given the formal name of ‘Grace,’
it is also known as ‘Generosity,’
and sometimes, ‘Kindness.’
The concept of this reckless munificence
frightens many, especially politicians,
eager to capture the votes of the mean-spirited,
and preferring the long-established reliability
of tax-cuts and border security
ahead of the uncertainty of noble compassion.
It would never do if those who are unworthy
were to receive something
to which they are not entitled.
Even those who have been touched
by this grace, given substance
in one who held back nothing,
struggle with generosity;
fearing to let go our truckloads of accrued stuff
in the delusion that it is of lasting importance.
The woman of Zarephath had nothing,
save her precious son, but acceded
to the prophet’s request to share their last meal.
This she did, according to the ancient story,
every day; discovering, in turn,
that the surprising quality of generosity abides,
glowing quietly with defiance.