A challenge to think again!

The truth is that there are many parts of Scripture where the morality is at best questionable and even some parts, like the condoning of slavery that we now reject. In John 6 [the Gospel reading set for this day], the people come looking for Jesus. He has fed them once and they wanted to be fed again. He encouraged them to seek the bread of life, which he was longing to provide for them.
There are many in our communities who are hungry for acceptance, acknowledgement that they matter to someone, that someone cares about the pain they have suffered and the neglect they have felt, who long to be fed with love and kindness, to be appreciated for who they are. Most survivors of abuse do not seek revenge. Most are looking for assistance to thrive, to come to feel God and others really care about what has happened to them.
When are we as the Church in general going to freely acknowledge that Jesus is the Living Word of God and that there are a number of passages in Scripture that are not consistent with Jesus’ teaching of justice and mercy? Probably the closet story we have to this one of David and Bathsheba from Jesus is the one about the woman taken in adultery where Jesus said, “Let the one without sin cast the first stone.”[John 8:7] He didn’t treat the woman like an object and nor did he blame her. Instead he treated her with quiet dignity.
If your response to this sermon is one of discomfort or agitation; if you want to say that it is making a fuss about something that doesn’t matter much, I urge you to think again. God loves and honours each of us as individual persons. God does not treat us as objects or possessions. Christ longs for us to be filled with the bread of life. When we can assist more survivors to thrive, our whole communities will also thrive.
The writer of the Epistle to the Ephesians talks of us being part of the body of Christ. This body can only thrive if we seek healing and wholeness for all its members and God longs to bring us such healing. May we be open to listening to the prophets of today who bring us the truth, even when it is painful.
Rev Julianne Parker (for full sermon see sermons page)

Give us this bread always

They ask for signs,
but fail to embrace
the sign that was given.
They were in happy agreement
when it was all about eating
and feeding upon crusty loaves.
On those days belief came easy
and their hearts had surged,
hoping, expectant.
But seeking, receiving and dining
on the food that endures for eternal life,
(whatever that means),
is another thing entirely.

Give us this bread always.
The request comes easily,
with eager, outstretched hands,
but few opt to stay around
to receive the answer.
And the sign,
despite its stark simplicity,
perhaps because of it,
is passed by, unnoticed and ignored.
Mostly. 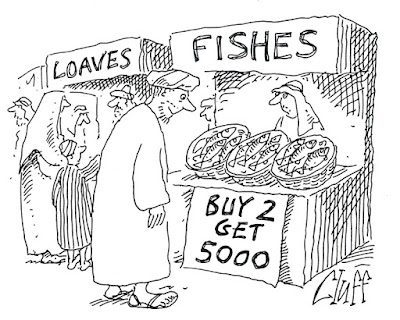 Email ThisBlogThis!Share to TwitterShare to FacebookShare to Pinterest
Labels: cartoon, jesus feeds the 5000, loaves and fishes, ordinary 17b


To get away from the multitudes
and their expectations
the man called Bread
withdraws to the hills.

Having eaten their fill,
the crowd still wants more.
They intend to make him king,
to claim him as their hero-leader;
that he might feed them when they are hungry,
heal them when they are sick,
and deliver them victory over their enemies.

Instead he gives them a handful of words:
crumbs of bread to fill them with hope,
and morsels of love to overcome their fears.
Then he offers them platters
laden with small parcels of his own strange life;
topped with generously with sacrifice.

None of these  dishes will prove sufficient
to satisfy the imagined hungers of the crowd.

http://laurajamesart.com/portfolio/book-of-gospels/
Posted by Joyce at July 16, 2015 No comments:

Haiku of the deserted place


in the midst of the mayhem;


A boat to escape,


find time to think, and to eat;


to pray and to weep.


to retreat from the masses.


city and village they come,

... Jesus became the problem solver for our guilt and fear instead of the blueprint for what God has been doing all the time and everywhere. The Epistle reading [Ephesians 1:3-14] tells us that God chose us in Christ before the foundation of the world. Most Christians are familiar with the image [John 15] of Jesus as the vine in which he names us as the branches. A vine is not a vine without branches so Jesus was saying we formed part of him. In the same way, we have the image of Christ as the head and us forming the body of Christ [ Colossians 1:18].
This understanding says we are each one of us, part of Christ and have been since the beginning of time. This simply does not fit with the idea that Christ is in some distant heaven, separated from us, until such time as he decides to return.  This understanding was held by St Francis of Assisi. He believed that every part of creation was part of Christ. That is why he treated animals with such respect. A common image we have of people in prayer is with their hand raised towards heaven. The statues of Francis show his hands turned towards the earth. What difference would it make to our respect for creation if we all understood all creation to be divine, part of God in Christ?


May we be open to hearing what others say from their relationship with Christ and willing to ponder/contemplate our thoughts and feelings as we seek to know Christ and to serve him.
Rev Julianne Parker
(for full sermon see sermons page)
Posted by Rev Gordon Bannon at July 06, 2015 No comments:

In the fears and uncertainties of first century Jewish politics
an insecure monarch lusts after the niece
who also doubles as his step-daughter.
At a birthday banquet,
the girl entices the gathered dignitaries
with a dance.
Arousing, provocative,
teasing and taunting;
she knows how to shake it.


In the old man’s fantasy foolishness
half a kingdom is offered
as the prize for his pleasant titillation.
A prophet's head,
severed from its outspoken owner'’s body
and proffered upon a platter,
is the price prescribed
by the girl’s vengeful mother.


A king's self-importance is never a small thing.
His ego expands even further
in the presence of multiple weighty witnesses;
the offending voice will be silenced.
For good.


It's been all about power, lust, politics, pride, and retribution.
Between them, over the next two millennia and beyond,
these evils will account for the larger part
of the world’s pain and sorrow.


During that time other offensive voices will be raised
and many will be silenced.
But an outrageous few will recklessly persist
so that the kingdom,
the kingdom grounded in love and truth and sacrifice
will come;
one day,
as promised.