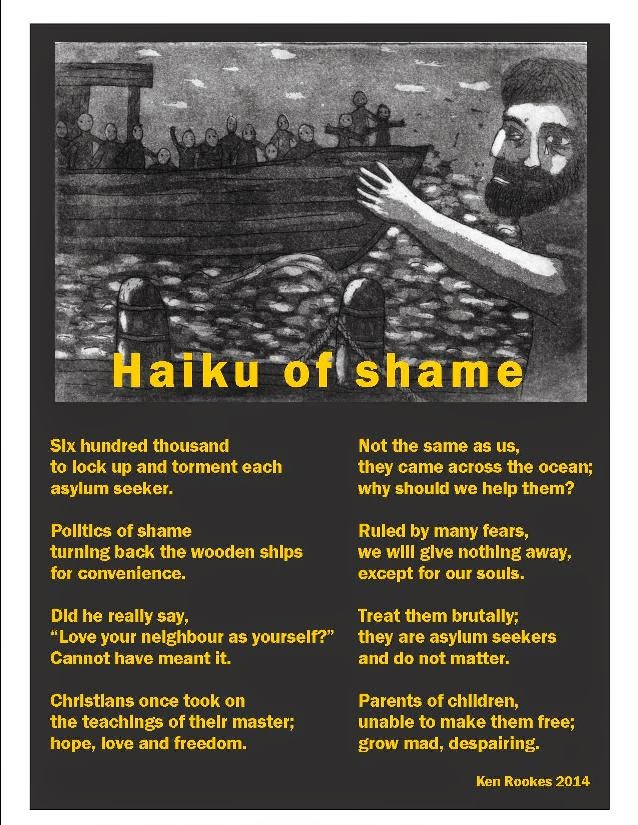 In the Gospel reading for today [Matthew 23:], Jesus had seen that by their actions, those who were supposed to be leading the people were in fact restricting them, imprisoning them in unfair laws, limiting their movement by laying heavy burdens of unnecessary requirements on them. The Church has placed burdens on people in the way it has interpreted and taught the Bible and rules it has made.
For some years some in the church have been shedding some of the burdens placed on them by past expectations and understandings of Scripture. Many old perceptions have died or have been left behind as people have been freed to understand things in new ways or have come to know the historical Jesus better. At the same time there has been much wandering in the wilderness. We have been burdened with the upkeep of grand buildings sometimes built as a display of wealth and skills rather than to the praise of God.
Many laments for congregations that have been lost.
There is debate about whether sudden death is less painful than anticipated death. Is it better for death to come suddenly or for it to take months or years. I do not know. I think it is good to have time for good-byes.
Paul worked hard to avoid being a burden to the people he cared about. We can put burdens on people who are grieving by telling them they should be behaving in a certain way, according to a certain pattern. We can burden them with guilt by asking if they had done something differently might their loved one still be alive. We can burden them by putting our understandings of God, Christ and the Bible on them by saying things like, “God took him,” or “His work on earth was finished.” These kind of things aren’t always the comfort that is intended.


Can we make the path easier for others by acting with compassion and love, n helping to rid them of burdens.
Rev Julianne Parker
see sermons page for full sermon
Posted by Rev Gordon Bannon at October 27, 2014 No comments:


I worry and I fear,
I need and I want.
I am anxious;
I could lose everything.

I am free;
I am burdened.

Some burdens are my own creation;
I tell myself that I am dealing with them.
Others I have received,
unwelcome gifts weighing heavily
upon shrinking shoulders,
from Scribes and from Pharisees,
who, in every age,
know with certainty what is best for me

I am burdened;
I am free.

I am free,
I am burdened.

The feast of all-saints

http://www.internetmonk.com/archive/the-feast-of-all-saints
Posted by Rev Gordon Bannon at October 26, 2014 No comments:

Email ThisBlogThis!Share to TwitterShare to FacebookShare to Pinterest
Labels: All saints, All souls, image, picture

A litany of all the Saints

Posted by Rev Gordon Bannon at October 26, 2014 No comments:

Email ThisBlogThis!Share to TwitterShare to FacebookShare to Pinterest
Labels: All hallows, All saints, All souls, Church, litany

A vision of wholeness for the saints

The peace of the Lord to all of you.

Posted by Rev Gordon Bannon at October 26, 2014 No comments:

Email ThisBlogThis!Share to TwitterShare to FacebookShare to Pinterest
Labels: All hallows, All saints, All souls, Saints, sermon illustration

The Muslim mystic, Rabl’a said, “To love God, not because of powerful institutions, or even because God commands it, but to do so in an act of unencumbered freedom, is the very source of mystical relationship.”
There is a gulf between theology [rational knowledge of God] and mysticism [experience of God]. Another Muslim mystic and martyr  from the 10ce[922ce] called Mansur al-Hallaj taught passionate, overflowing love as the heart of the divine being instead of blind imitation and obedience. Such love is the mystery of creation. He said, “Whoever seeks God runs ahead of God’s revelations, but whomever God seeks has revelations overtaking his running.” This is what God does for children and explains their experiences of God.
John of the Cross wrote that God does not reserve the calling to contemplation to particular souls. On the contrary, God hopes all will embrace it.
We heard last week that Moses asked God to let him know God more and we heard God’s response in giving him a vision of God’s goodness. How well do we know God’s goodness? Meister Eckhart, a Christian mystic put it we have “not been created for small things.” Contemplating this is both exciting and daunting.


We are invited into a mutual relationship of love with God and then when we have been loved, we will be equipped for the sometimes enormously difficult task of loving our neighbours and ourselves.

Any religion;
whichever myths have inspired it,
no matter how it connects its members
with divine spirit,
whatever its claims,
however it patterns its ritual
or intones its worship;
is an empty shell
if it fails to draw from its adherents
lives of creative generosity.

In the writings of a breakaway group
named for its reluctant founder;
the plethora of commandments
in the Hebrew scriptures
surrender their ground
to a pair.

The carpenter from Nazareth
spoke often of divine agape,
the source of all that is good and true.
His listeners were invited
to make their own fruitful responses,
to share the love.
He calls this costly agape stuff
the greatest of fruits,
and enacts it at every opportunity.
Love, along with her precious siblings;
generosity, forgiveness, peace, tears and hope,
provide the means, he assures us,
by which the planet,
along with its diverse and wonderful creatures,
will find life.

Thus this text offers little or no guidance for tax season. It neither claims taxation is legitimate nor gives aid to anti-tax activists. It neither counsels universal acceptance of political authority nor its reverse. But it does raise the provocative and still relevant question: what belongs to God, and what belongs to Caesar? And what if Caesar is Hitler, or apartheid, or communism, or global capitalism? What is to be the attitude of Christians toward domination systems, whether ancient or modern?-Marcus Borg

There is a paradox in this knowing business.

I can understand why Moses wanted to know God more. As he said, God knew him and relationship is about mutuality. It is always a bit disconcerting to talk with someone who obviously knows who I am but I have no idea who they are. They may have called me by name, and instead of concentrating on the conversation, I may be wracking my brain, trying to think of their name. I am searching for a clue as to who they are and wondering where we may have met. Usually it is someone I have met in a different place and this may become the key to unlocking recognition of the person.
After six months in a new placement, Fred said at an Elders meeting, “I hardly know you people yet and know little about you.” The unexpected reply he received was, “Why would you want to know us?” “So I can care for you better”, Fred replied.
There is a paradox in this knowing business. The less we actually know about any person or thing, the more we may think we know and the more we know, the more we realise how little we know. Yet there is a point where we can know more than we want to about ourselves and others because that knowing is too much for us to bear. We condemn the uncaring nature of the Church leaders who didn’t respond to the knowledge of abuse. Perhaps we could ask why they were unable to respond with justice and compassion in situations where justice and compassion where clearly called for. What had happened in their lives that we might not know about to lead them to deny help where help was needed?


I was recently reminded that meditation and worship are where we seek to know the Transcendent God while mission is about following the Immanent God. There is joy in knowing Christ… God gives us the honour of a deepening knowledge and relationship. We can give to God a willingness to consider what God would like us to know. It is from such deepening relationship that we are better able to give to God a willingness to follow the Way of Christ, inspired by joy and compassion.

It has been coupled with Romans 13, which has been used for centuries to justify passive obedience to the state, even when the state has been monstrous. How could Paul be referring to the state when he said that the authorities are put there by God, and whoever resists them resists God? (Rom 13:1-2) He lived under the brutal and murderous regime of Rome!

I would suggest that we re-read Romans 13 with a completely different understanding. Perhaps the “authorities” Paul is talking about are the leaders of the church. In the surrounding chapters Paul is talking about the marks of the true church and how we ought to live together in peace and love. I can hardly imagine Paul telling us to submit to anyone other than to God and to each other as Christians. It doesn’t appear to be about obeying governments at all. And neither is Matthew 22, where Jesus’ punch line is “Give to God what belongs to God.”"

http://laughingbird.net/ComingWeeks.html
Posted by Rev Gordon Bannon at October 14, 2014 No comments:

Whose wife will she be?

When we have finished living,
after we die,
we will continue to exist; in some form.
So Jesus is recorded as saying
as he responds to the improbable scenario
put to him by a group Sadducees
endeavouring to ridicule
notions of resurrection.
This state of eternal existence will be quite unlike
that which we have previously known,
here among earth’s red dust;
he tells them.
Don’t expect family reunions,
welcoming friends
or the lovers embraces
so favoured by our imaginative reassurances
in times of grief.
And there will be no opportunity
to complete or to add
to the life that has been concluded.
The goodwill we have sown,
the love we offered,
the peace we made,
the grace by which we lived
and the hope, joy and laughter
we spoke, danced and sang;
these alone will stand.
Gentle, sometimes unnoticed,
they witnesses to the reality
of our faith and worship.

It is enough.
Would it be so terrible
if the Sadducees were right?

It is enough.
Would it be so terrible
if the Sadducees were right?