You're one of those!


Jim Wallis, one of the founders of the Sojourners community, told a story about a colleague living in a village in Central America. She worked in a community that was marginalized in all kinds of ways. She poured herself into her work for social justice, laboring with great might to bring change to this village. One day, some of the people of the village came to her, asking her why she worked so hard, why she didn’t join them in their fiestas or sit with them in their porches in the evening.
“There’s too much work to do!” the laboring woman replied. “I don’t have enough time.”
“Oh,” the people of the village said. “You’re one of those.”
“One of who?” the woman asked.
“You are one of those,” they responded, “who come to us and work and work and work. Soon you will grow tired, and you will leave. The ones who stay,” they said, “are the ones who sit with us on our porches in the evening and who come to our fiestas.”

Jim Wallis said that his colleague took the story to heart, that she became a party animal, and that she was still there.
Posted by Rev Gordon Bannon at October 31, 2011 No comments:

The parable of the ten wise vigins

Back in the days when only young men prepared for pastoral ministry, a certain Dr. Eislen, president of Garrett Seminary, preached on this parable in chapel. When he reached the climax of his message, he yelled at his seminarians, "Young men, tell me, would you rather be in the light with the wise virgins, or out in the dark with the foolish virgins?" Such laughter arose that chapel was dismissed early that day! 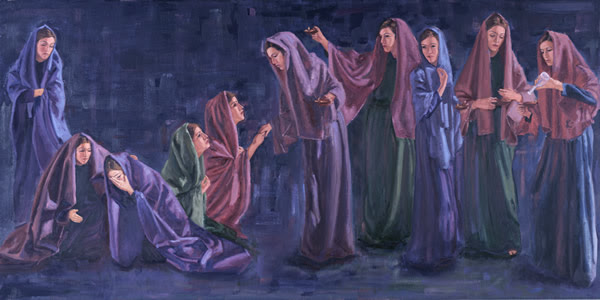 Posted by Rev Gordon Bannon at October 31, 2011 No comments:

Those who impart knowledge

should be bearers of truth;

what else is worth telling?

This high calling brings its own reward.

of Jesus, the itinerant teacher,

who practised what he taught

and depended upon the generosity

of those who heard his stories.

the Nazarene lacked a Dip. Ed,

but his teaching methods

didn’t seem to suffer as a result.

Of course, to become learned back then

one went and sat at the feet

of the best teacher one could find;

listened intently, and did one’s best

to create an intelligent dialogue.

No degrees or diplomas then,

simply the boast that called upon

and extolled the reputation of one’s master.

We don’t know much of Jesus’ schooling,

save one small glimpse, (probably mythical,

but ringing true), at the age of twelve.

Then he was said to be a prodigy,

precocious enough to take on

and astound the heavies in the temple.

Among the truths that Jesus told

were teachings about the humility

that should envelop all

who have been graced

by the deep and loving

to me when I pray.

Just do what I do,

Do the right thing,

stay away from sinners.

The world will be better for your efforts,

and not only that,

but God will bless you.

realise what a great person you are.

It works for me.

broad, and your fringes long.

Some people want to see God with their eyes as they see a cow, and to love Him as they love their cow- for the milk and cheese and profit it brings them. This is how it is with people who love God for the sake of outward wealth or inward comfort. They do not rightly love God, when they love Him for their own advantage. Indeed, I tell you the truth, any object you have in your mind, however good, will be a barrier between you and the inmost Truth.-Meister Eckhart 1260-1327
http://www.edgeofenclosure.org/proper25a.html
Posted by Rev Gordon Bannon at October 20, 2011 No comments: 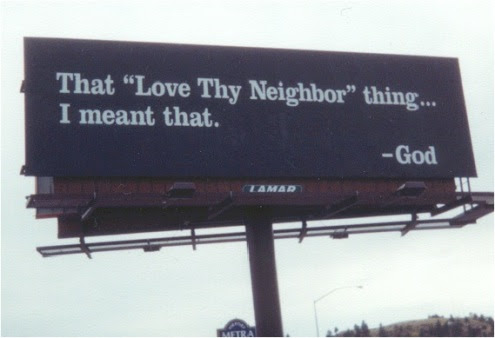 Posted by Rev Gordon Bannon at October 19, 2011 No comments:

Email ThisBlogThis!Share to TwitterShare to FacebookShare to Pinterest
Labels: God, love your neighbour

join the dots, how easy is that?

Posted by Rev Gordon Bannon at October 19, 2011 No comments:

or rather, the pair of them

as defined a couple of millennia ago

by the travelling teacher from the north;

would be lucky to make a top-ten list today.

God has gone out of fashion,

so there’s not much call for the first part.

however, with most people agreeing

that to love one’s neighbour is important,

but should be practised within limits.

What we need is a drive to reinvigorate

the loving of our neighbour.

Perhaps we could rewrite it:

in a way that would make it be more acceptable:

“Love your neighbour when it proves convenient.”

“Love your neighbour in principle,”

once a month or so.”

when she/he is deserving of your munificence.”

“Love your neighbour when you’ve finished

with the more important things.”

Yes, any of these could work

"So I came out to face this contradiction: the dehumanization of poverty and the exploitation of capitalism. A block away from the park where the second General Assembly was being held, I heard the words "I love you." The words were as swift as the man who said them, for when I looked back he was already five paces away. But they were as firm as those paces — heavy with determination, purpose, depth. His words permeated the air in Washington Square, and the air on the march, and the air in Zucotti Park. Love was EVERYWHERE!"
Posted by Rev Gordon Bannon at October 18, 2011 No comments:

THE GUEST HOUSE This being human is a guest house. Every morning a new arrival. A joy, a depression, a meanness, some momentary awareness comes as an unexpected visitor. Welcome and entertain them all! Even if they are a crowd of sorrows, who violently sweep your house empty of its furniture, still, treat each guest honorably. He may be clearing you out for some new delight. The dark thought, the shame, the malice. meet them at the door laughing and invite them in. Be grateful for whatever comes. because each has been sent as a guide from beyond. -- Jelaluddin Rumi,     translation by Coleman Barks
Posted by Rev Gordon Bannon at October 18, 2011 No comments:

according to one who studied the matter

so that it might shape his living, is one of a pair:

the loving of God

and the loving of people

with whom our lives intersect.

Which means treating them with respect

and extending to all the benefit of the doubt.

It means other things, too;

when we find ourselves

taking every opportunity for kindness,

and behaving with gentleness

when circumstances become coarse or brutal.

It leads to an attitude of healing

and allows blessings to punctuate our speaking.

It quietly takes within the surrounding pain,

and voices outrage for the sake of the little ones

whose tongues have been silenced.

is also the most costly.

It sings and sighs,

all the time bringing glory

to the one who ordained it.

of which it is intended to be the centre. 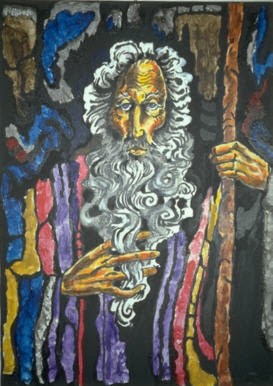 http://www.ratnermuseum.com/israelbiblemuseum/virtual/exodus/img0066.htm
Posted by Rev Gordon Bannon at October 17, 2011 No comments:

its not about tax

Thus this text offers little or no guidance for tax season. It neither claims taxation is legitimate nor gives aid to anti-tax activists. It neither counsels universal acceptance of political authority nor its reverse.
But it does raise the provocative and still relevant question: What belongs to God, and what belongs to Caesar? And what if Caesar is Hitler, or apartheid, or communism, or global capitalism? What is to be the attitude of Christians toward domination systems, whether ancient or modern?
Read more: http://www.beliefnet.com/Faiths/2000/04/What-Belongs-To-God.aspx?p=2#ixzz1aRscV5CY
Posted by Rev Gordon Bannon at October 11, 2011 No comments:

And he said to him,

“If your presence will not go,

Don’t mess with us, God.

If you’re not going to stick around

then let us end it now.

and we will find another god.

The golden calf may have been a crude

but it was shiny and it was ours.

Substitute or not, when we needed it

we knew where it could be found.

that you will go with us,

as, sore, weary and failing;

and stumble uncertainly towards

have told of your undoubted power;

we have been impressed, but these

without your presence we fail.

of an avenging angel;

embody itself in one who will visit

righteous retribution upon those who

to abuse and exploit and destroy.

There, in the scriptures,

we find an image of the avenging God,

jealous and wrathful, and we imagine

with the reality of their sin/crimes

the vengeance is exacted.

takes many scales and forms:

and medium sized dealings of opportunism,

Then there are the avertings of eyes,

the stoppings of ears,

and the convenient silences

in the face of political compromise

fortunately for us, a carpenter

from a northern province in Palestine

enacted a word of grace

to override demands for vengeance,

and to liberate us from our fears.

Still, the psalmist reminds us, God,

is a lover of what is right and true.

No longer directed by fear

but guided by love,

in his work of justice. 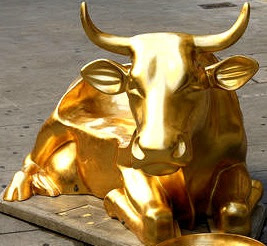 Where are the gods
who brought us out of Egypt;
where are the reassuring gods
who speak the words we anxiously crave?
Let us build an altar upon which our chosen
and carefully crafted god
can be enthroned in majesty.
And let us dance and sing
in frenzy and abandon
to the gods of gold and comfort;
the gods that promise
that our labour will be rewarded,
our bellies will be filled,
our borders protected,
our security guaranteed,
and that those less worthy will receive
only that to which they are entitled.
Golden, and bovine shaped.
These, these are the gods we adore,
before whom we will make the sacrifice
of our planet and our peace,
our compassion and our conscience;
and the future of our children.
Let us build an altar
.

Posted by Rev Gordon Bannon at October 03, 2011 No comments: