on white paper the words

are moved about urgently

but they refuse to function.

the horror is too great,

the grief too profound;

there can be no poem.

robbed of any power,

the words are dismissed;

let there be silence.

the aching and the mystery.

Yes, even in the midst of Easter's joy there are those who experience anguish and grief. I post this poem in memory of my brother Neil.

If we are willing to work through our fear and our doubts, we will find the other side of today’s Gospel that teaches us also about faith. We need also to look past this story as mere history and ask what it means. Though we have often brought to the story our judgments, I do not believe that is the main point of the story. Firstly the story is saying to us that, in the face of the reality of death, pain and despair, there does seem to be no hope. How can we believe that things can be different?

Secondly, the story is saying to the early Christians and to us, that we are blessed who have not seen and somehow come to believe this. The story does not lay judgment on us or Thomas for our questions. It does however; ask us to believe in the ultimate power of life over death, of love over hatred, of hope over despair. It does not ask us to get caught up in a theological/scientific argument about the nature of the resurrection! That is about a mere once off miracle. It does ask us to go beyond that to know the truth of what the resurrection means to us.
What that means for us is that we need no longer live in the valley of despair, but can rise above that to believe in the power of God to bring new life where we have only seen and known death.
Posted by Rev Gordon Bannon at April 29, 2011 No comments:

"According to legend, “doubting Thomas” eventually traveled to , sharing the good news in a very different religious environment. To this day, a group of Indian Christians refer to themselves as “Thomas Christians.” Truly, doubt gives birth to transformation and courage when we faithfully wait for the right moment, when God’s truth awakens us to a new vision of reality. Doubts will always remain and emerge from time to time, but we will know that doubt is itself a doorway to experiencing God’s presence in our life. Doubt may even be the space that makes room for resurrection faith.  In our faithful doubt, we will make room for the seekers in our community and the seeker in ourselves."
see http://stthomaschurch-sa.org/santhome.aspx
Posted by Rev Gordon Bannon at April 27, 2011 No comments:

one element of faith

Paul Tillich
Doubt is not the opposite of faith; it is one element of faith."

"The old faith must die, eaten away by doubts, but only so that a new and deeper faith may be born."
Posted by Rev Gordon Bannon at April 27, 2011 No comments:

Dostoyevsky – "My hosanna was wrought in the crucible of doubt' 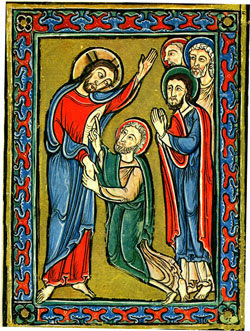 Those who have not seen

that those who have not seen

Those for whom a mere glimpse

of shining hope and truth

is enough to lay hold

of their earth-bound souls

and catapult them into sacred lifetimes

of searching and striving.

Their hearts swell, indignant and angry,

at the meanness of the self-righteous,

that they shall tread the different path.

They shall be blessed.

Believing against all evidence,

that wrongs can be made right,

that darkness can be defied,

and that love, generous

in its many colours and permutations,

will rise above the paralysing fear;

they shall be blessed;

These few who are captured by the story

of one no longer seen, yet defiantly present;

for them the slightest whisper

of his enthralling voice is liberation and life.

Unashamed to weep, unafraid to die;

they shall be blessed.

We all know that. Crucifixion,

as a means of execution,

was not chosen for its humane qualities

but for its effectiveness. An innocent man

dies a painful death. He was not alone.

no less innocent of the crimes

of which they have been accused;

arbitrary victims of policies of oppression,

or simply to increase the reign of fear

In processions and shopping centres,

at this time of the year we see them;

they plod towards their imagined Calvary,

or excitedly ascend their particular version

of a wooden cross.

they issue their “Easter” invitation to choose

between heaven and hell.

Is this what Easter is all about?

I would abandon my faith in an instant

if I thought it were so.

If Easter means anything, it surely

declares that those who have been touched

by resurrection’s power will not rest

until the brutal causes of Jesus death;

have been eliminated by love.

reign, and let questions of heaven and hell

be consigned to the same heap of irrelevance

as all the fake blood.


© Ken Rookes 2010
I posted this poem last year, bur feel that is remains relevant after viewing, (and taking part in) the Bendigo Easter Festival Procession this morning

A Radical trust in God

"This is what resurrection faith is all about. It’s got nothing to do with theories and doctrines and speculations about the nature of Jesus’ post-Easter body. It is a radical trust in the God who keeps coming back when everything seems lost. A willingness in the face of overwhelming odds, of oppressive power-mongering and the might of dollar and dictator, to entrust ourselves to the ways of life and love. To sing and dance and celebrate in the face of those who would stifle joy and measure out existence by the spoonful. To rejoice even in the face of our own doubts, because as Matthew said, even face to face with the risen Christ some still doubted. So used have we become to the inevitability of the ways of death that we suspect we’ve lost our grip when we see with our own eyes that it is not so. But it doesn’t say they were kicked out of the church." http://www.laughingbird.net/LaughingBird/Welcome.html
Posted by Rev Gordon Bannon at April 21, 2011 No comments:

All they could do.

All they could do,

the gospel writers, and those

who crafted the stories before them,

was to grope in wonder after some words.

Words to convey even a shining edge

of the full mystery. So they wrote of angels

shimmering with white, and an earthquake

that shook the very foundations of both earth

and heaven; and of the surprise

of a disappearing man who could not be grasped

but who was strangely with them still.

Of the impossibly empty space that death

had once occupied. They told of a stone,

the removal of which would have required a forklift,

that had apparently been flicked away

by a divine finger. They wrote of unsurpassed joy

and of hope that had been conjured ex nihilo.

They told of embracings, of illuminating journeys

and intimate dinings, of unexpected recognitions

Their stories included the elements of honest fear,

as if to underline the wonder.

One who they had loved,

in whom the Divine One appeared to dwell,

and who, they all attested, had been killed;

was somehow present. Living. Decades on.

All they could do was grope

in the diminished darkness, and hope

to find some words.

Of the terrible doubt of appearances,Of the uncertainty after all, that we may be deluded,That may-be reliance and hope are but speculations after all,That may-be identity beyond the grave is a beautiful fable   only,May-be the things I perceive, the animals, plants, men, hills,   shining and flowing waters,The skies of day and night, colors, densities, forms, may-be   these are (as doubtless they are) only apparitions and   the real something has yet to be known,…To me these and the like of these are curiously answer’d by   my lovers, my dear friendsWhen he whom I love travels with me or sits a long while   holding me by the hand,When the subtle air, the impalpable, the sense that words   and reason hold not, surround and pervade us,Then I am charged with untold and untellable wisdom, I am   silent, I require nothing further.I cannot answer the question of appearances or that of   identity beyond the grave.But I walk or sit indifferent, I am satisfied.He ahold of my hand has completely satisfied me.
Posted by Rev Gordon Bannon at April 20, 2011 No comments: 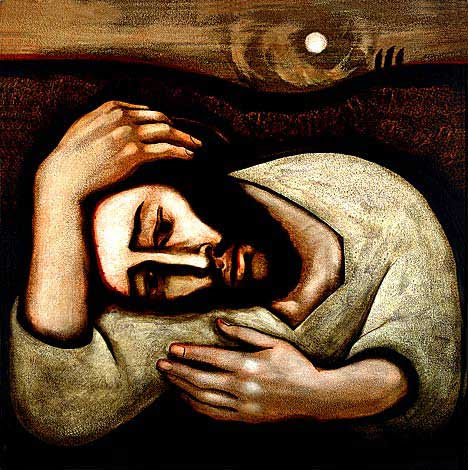 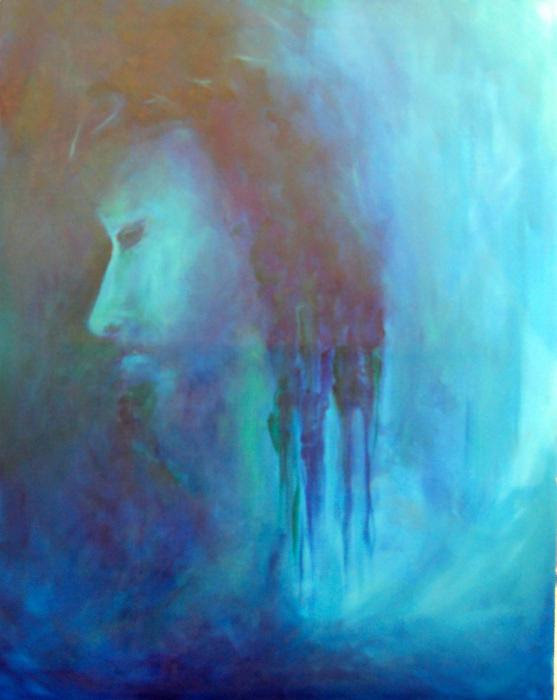 Gethseamane, the hour is near

A Painting by Anthony Falbo

http://www.falboart.com/Originals/originals3.htm
Posted by Rev Gordon Bannon at April 19, 2011 No comments: 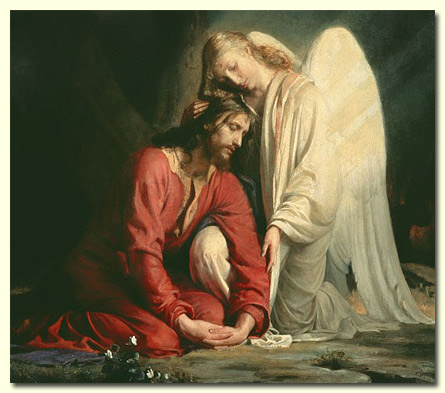 GethsemaneThe grass never sleeps.Or the roses.Nor does the lily have a secret eye that shuts until morning.Jesus said, wait with me. But the disciples slept.The cricket has such splended fringe on its feet,and it sings, have you noticed, with its whole body,and heaven knows if it ever sleeps.Jesus said, wait with me. And maybe the stars did, maybethe wind wound itself into a silver tree, and didn't move,maybethe lake far away, where once he walked as on ablue pavement,lay still and waited, wild awake.Oh the dear bodies, slumped and eye-shut, that could notkeep that vigil, how they must have wept,so utterly human, knowing this toomust be part of the story.-Mary Oliver
http://www.edgeofenclosure.org/gethsemane.html
Posted by Rev Gordon Bannon at April 19, 2011 No comments:

If it be your will

Perhaps it was as much a grove

as a garden. Gethsemane;

the word denotes an oil vat.

One imagines the gnarled

of the ancient olive trees

over the prone man as he wrestles, sweats,

and utters his anguished and lonely prayer.

The springtime equinox had just passed,

and the trees were in flower;

hidden by the darkness.

spoke to the man’s heart, prompting

a yearning message of impossible hope;

but we have no indication of that.

More likely they told him

of the fruit that would grow ripe

and bitter in the summer’s heat,

to be gathered in the autumn.

The man will reap a winter’s harvest

in the cup that he prayed

would be taken from him.

For the sake of tear-drenched love

he tastes the choking draught,

and experiences the anointing

from the bitter, dark fruit of sad religion;

ripe, and full of fear. 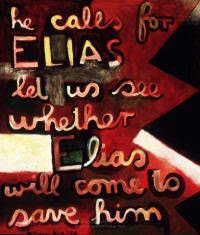 Colin McCahon. Elias cannot save him. 1959 On viewing the Elias series.

of all New Zealand artists,

mixed his palate of doubt and faith

and spread it over his courageous

canvases half a century ago.

and challenging words to respond

to the story of his Lord’s last hours,

suspended from a cross and waiting

The crowd waited, too,

for something to happen.

report that Jesus’ cry of dereliction,

was misinterpreted as a call to Elijah

to come and save him. The crowd

got a little excited in anticipation:

But no-one came, certainly not Elijah.

And so Jesus died.

Colin continued to paint his questioning

canvases, offering his own voice

for others who also question, doubt,

wonder, and half believe.

Who is this man who bleeds and dies?

These words that he painted

on the canvas of his living,

which are the ones that we need to hear?

What will happen to the one

whom God has abandoned;

and what has he to do with me?